A couple of weeks ago I did an overall upgrade of my server and moved this jekyll blog from Heroku’s servers over to my own dedicated machine. During this process I also gave my blog an overhaul and added SSL encryption and made it more efficient by minimizing more resources and adhering to Google’s PageSpeed Best Practices.

The new setup is based on the awesome dokku, a docker-powered Platform as a Service (PaaS). Coming from the heroku platform it now allows me to quickly deploy changes of my webpage and host it on my own machine. Furthermore I can run multiple different applications that are isolated from each other (anagram, screen, sudoku). But Docker can provide even more benefits:

To setup an application with dokku I just had to create a simple Dockerfile. It is based of the official ruby image and adds node and yarn to the mix.

Afterwards I install all dependencies through yarn, gem and bower.

Finally I can build the site with the jekyll command.

One major issue I encountered was that changes often took a while to be pushed. Each time I change any small file, e.g. correct a typo on a blog post, docker would reinstall the entire blog with its dependencies. Usually Docker is smart about this and keeps a cache of the different parts of the Dockerfile. But if you added something to the docker context and something changes docker has to restart from there. Since I added my complete project folder at once, any change, as small as it might be, always triggered a complete rebuild of my application.

The steps of the process that took the most time where the dependency installations. For my blog I use three different commands that take a longer time to execute:

Ideally I still would like to test my blog under the same conditions as on the server. If I would have to reinstall all dependencies everytim I make a minor change that would slow me down drastically. So what do we do about this?

To ensure that dependencies are only reinstalled when the corresponding configuration changes we have to selectively add the files to the docker image.

For my blog these files are:

We have to add these 3 files beforehand. And furthermore install the dependencies in a global or temporary location so that we can add them back to the rest of the application later.

Depending on which configuration file changes, all the steps that come afterwards have to be executed again. If we want to be smart about our approach, we can order the different installation steps in a more efficient way. In my case this would be:

For my application bower dependencies are changed the most frequent, so I install it last. After that I sometimes install new jekyll plugins. And finally comes yarn, where there are mostly just development requirements like gulp that almost never change and I therefore install it right at the beginning. 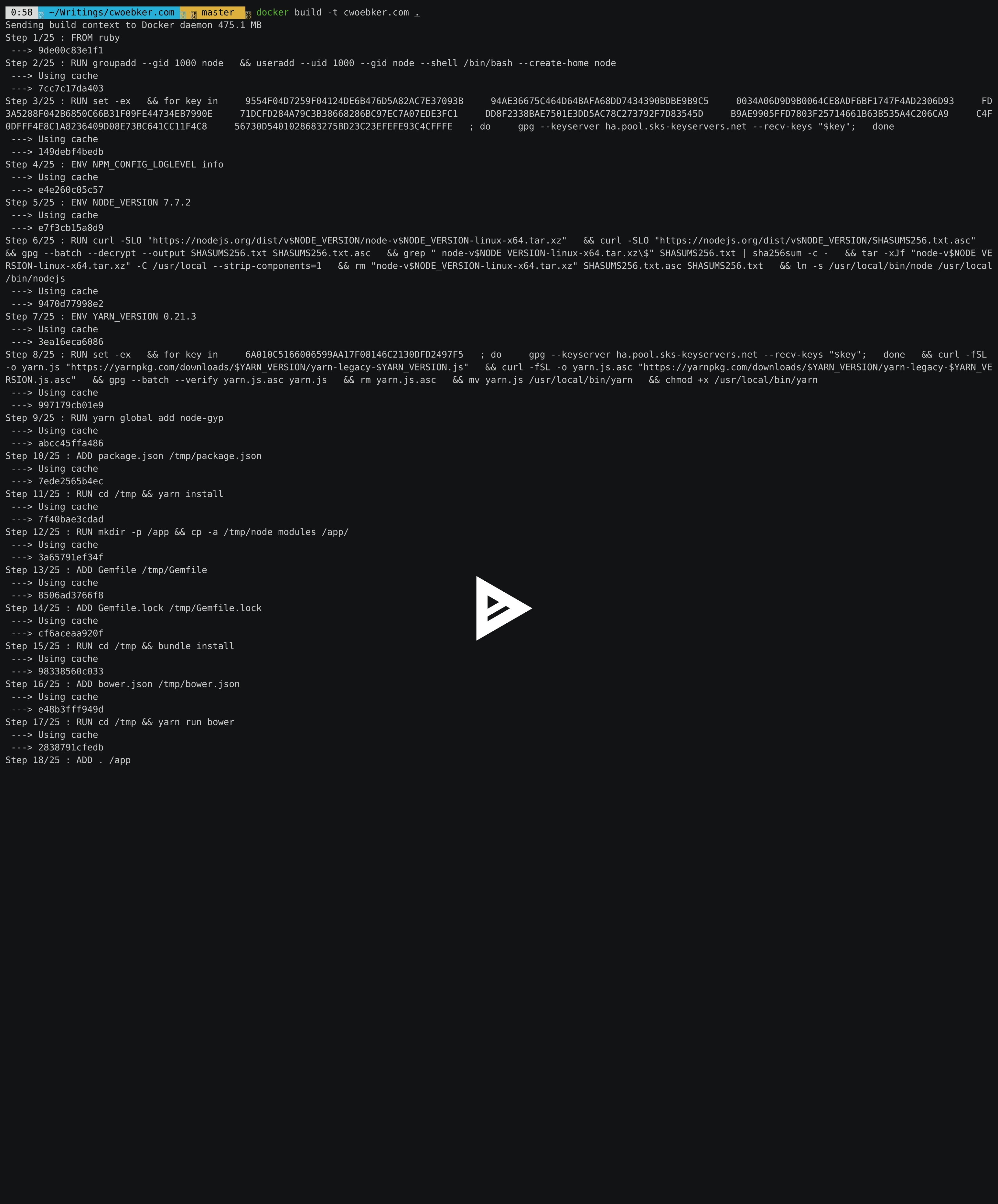 Of course you can use a similar setup for all kinds of dependencies and installation steps that you have. The core idea is to selectively add the files and build your docker image on a step-by-step basis.

Below you can find the final version of my Dockerfile. Don’t hesitate to ask, if you have any questions!